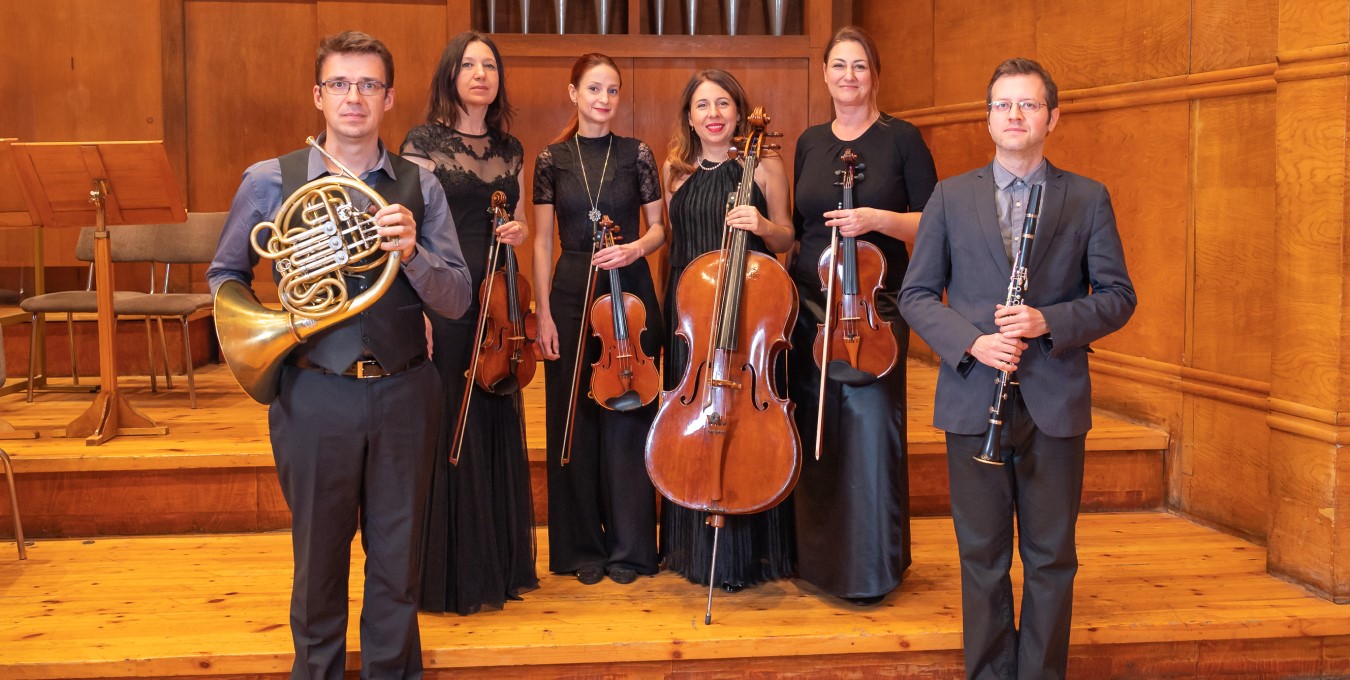 Currently the first violin in the ensemble is Kalina Hristova – Concert Master of Sofia Philharmonic.

Kalina Hristova received her musical formation at the National Music School “Lyubomir Pipkov” and then at the National Academy of Music “Professor Pancho Vladigerov,” in the violin class of Professor Elisaveta Kazakova.  While at the Academy, she also spent time in Torino, Italy, specializing with Professor Mariana Sirbu.  From 1993 to 2000, she furthered her experience as ensemble musician in the role of concertmaster of the “Orpheus” chamber orchestra, Pernik, Bulgaria.With proven professionalism and individuality, she is concertmaster of the Sofia Philharmonic Orchestra, a post she has held for 16 years now. She is also a frequent soloist with numerous orchestras in Bulgaria and abroad. Recent appearances as a recitalist include Osaka, Kyoto and Nara, Japan and as soloist with the Kanzai Philharmonic, Japan. As both soloist and chamber musician she regularly participates in festivals in Bulgaria, Germany, the Netherlands. She has made numerous recordings for the Bulgarian National Radio and Television.

Tsvetelina Popova – Staykova was born in Sofia. She began studying violin at the age of four and finished the National Music School “Lubomir Pipkov” with honors. She graduated from the National Academy of Music “Prof. Pancho Vladigerov” ” in Sofia in the violin class of prof. Alexander Ilchev and received her master degree with prof. Evelina Arabadjieva.Since her school years she has been interested in chamber music and has participated in various ensembles and competitions. In the year 2000 she was a scholarship recipient of the Summer Academy for Baroque Music under the direction of Reimar Orlovsky (violin) and received the award for best participant in the academy. In 2004 and 2005 she again was a scholarship recipient of summer academies, this time with prof. Peter Buck (Melos Quartet) and prof. Kolia Lessing (violin) in Oberstdorf, Germany. In 2002 she joined the Classic FM Radio Orchestra and in 2006 became associated principal violinist of the second violins. Together with the orchestra she has participated in a number of chamber and symphonic projects, among them, memorable concerts with Nigel Kennedy, Gill Shaham, Pincas Zuckerman, Joshua Bell, Maxim Vengerov, Shlomo Minz, Vesko Eshkenazy, Svetlin Rusev, Vasko Vasilev, Mila Georgieva and many others. From 2009 to 2016 she was a member of the Sofia Opera and Ballet Orchestra and in 2017 she joined the Bulgarian National Radio Symphony Orchestra.

Evgeniya Georgieva Baadzhieva – Dimova studied at the Music School “P. Pipkov” in Pleven. She graduated from the National Academy of Music “Prof. Pancho Vladigerov” in Sofia in the viola class of prof. Ognian Stanchev and completed her master degree in viola with prof. Stefan Jilkov. Over the years, she has worked with many orchestras – Collegium Musicum Bankja, Chamber Orchestra “Orpheus”, Academic Symphony Orchestra, Sofia Opera and Ballet Orchestra. She regularly performs and records with the New Symphony Orchestra of Classic FM Radio, Chamber Orchestra Studio Primo, Sofia Session Orchestra, Sofia Soloists and others. Since 2012 she has been associated principal violist at the Bulgarian National Radio Symphony Orchestra.

Kristiana Alipieva Genova-Mihaylova studied at the Music School in Burgas and at the National Academy of Music  “Prof. Pancho Vladigerov”, where she completed her Bachelor and Master degree in violoncello with prof. B. Karakonov. She also specialized in 2013-2014 at the New Bulgarian University with prof. Hristo Tanev. During her studies she was a soloist of the Academic Orchestra at the National Academy of Music, Sofia and the Burgas Philharmonic and was a price- winner of a nomerous  of competitions. As a soloist, she has participated in master classes with Robert Cohen, Young  Chang Cho,  prof. Peter Buck (Melos Quartet), prof. Laszlo Mezo (Bartok Quartet), Ulf Tischbirek (Lubeck), Xenia Jankovic, Martina Schucan (Zurich), Dominique de Williencourt, Stefan Popov, Lilia Shultz- Bayrova, Vencislav Nikolov. She has also participated in music festivals – Oberstdorf (Germany), “Prague- Wien –Budapest” (Austria),  International  Festival “Balabanov’s House Music Days”, (Plovdiv) , “Apolonia”(Sozopol). As a chamber musician, she has specialized in master classes in with musicians and teachers from the string quartets Prague Quartet,  Mosaiques Quartet,  Vienn  Quartet, Bartok Quartet, Keler Quartet and Melos Quartet. She is active as a chamber musician and has performed with Andrew Mariner, Maria Prinz, Vasily Ilisavsky, Alexis Kosenko, Elizabeth Pitcairn etc. She was honored to perform the Haydn Passacaglia for Violin and Cello with Nigel Kennedy. Kristiana Mihailova successfully combines her career as a soloist, chamber musician, and member of several orchestras. Since 2008 she has been a member of the Sofia Philharmonic, and during 2006 – 2011 of the Symphony Orchestra at the Summer Academy Chigiana  in Siena, Italy. Since 2002 she has been principal cellist and concertmaster of the Classic FM Radio Orchestra.