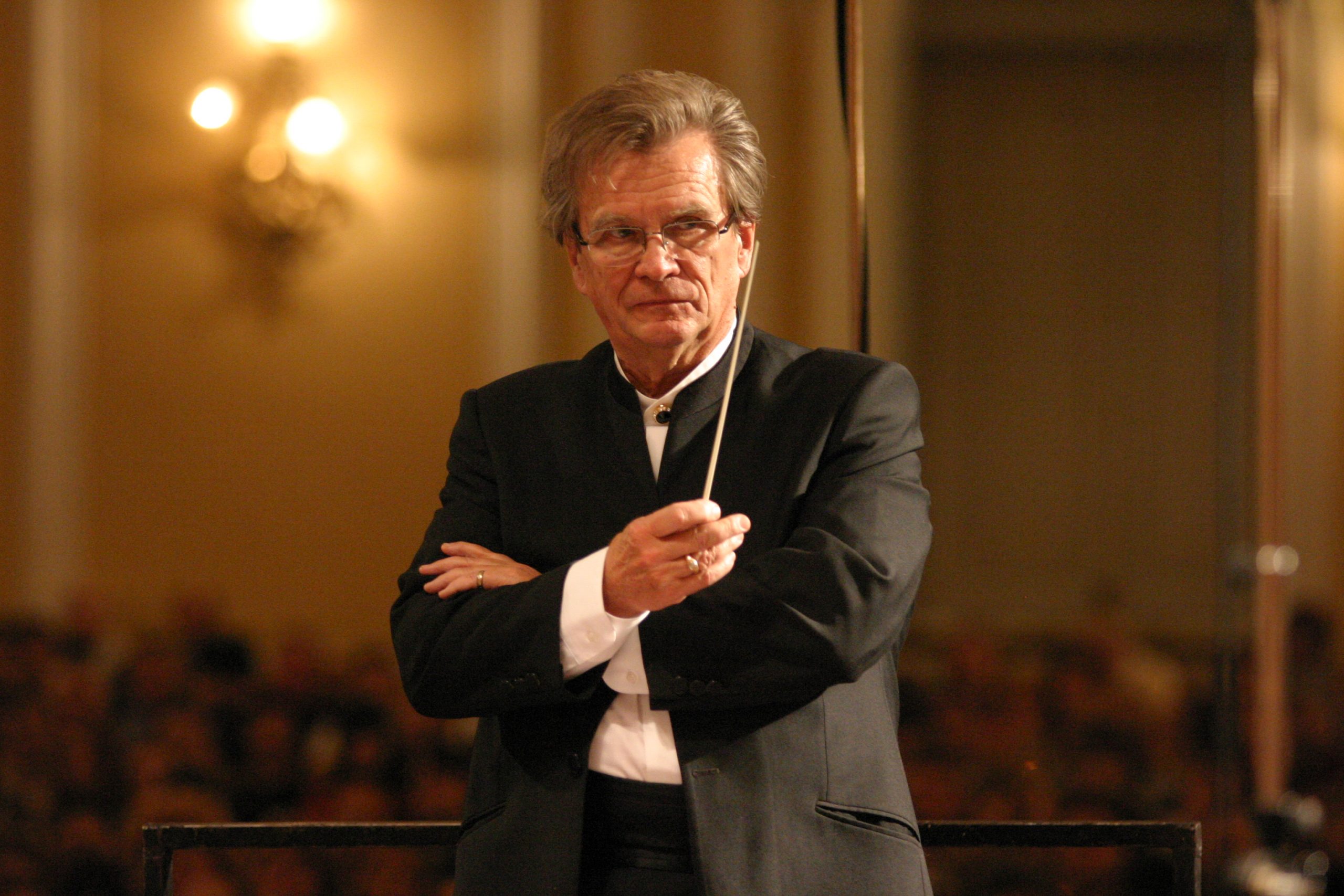 Vladimir Fedoseyev is one of the most popular and beloved conductors of our time. “Success came to Vladimir Fedoseyev in a natural way, as it comes to the man of outstanding gift who has done so much for big music and who has a really creative life,” wrote composer Boris Tchaikovsky about the conductor. And Tikhon Khrennikov noted, “A conducting gift is a very special sort of musical talent. Just like a singer, a conductor must have his ‘conductor’s voice’. Fedoseyev is a happy owner of such a voice. This clearly sounding conductor’s voice is heard in everything — in the leader’s will, in the artist’s temperament and in plasticity of gestures.”
He was born in Leningrad on August 5, 1932 and received his musical education at the State Gnessins Music Teachers Institute (now the Russian Gnessins Music Academy) and attended a graduate course at the Moscow Tchaikovsky Conservatory with Professor Leo Ginsburg. He started his conducting career in the Leningrad Philharmonic Orchestra after he was invited by Evgeny Mravinsky. Vladimir Fedoseyev’s theatrical conducting debut also took place in Leningrad, at the State Kirov (Mariinsky) Academic Opera and Ballet Theatre where he staged The Tsar’s Bride by Rimsky-Korsakov.
In the 1980s and 1990s, Vladimir Fedoseyev presented concert versions of Tchaikovsky’s Eugene Onegin, Rimsky-Korsakov’s The Snow Maiden and Rachmaninoff’s Aleko at the Salle Pleyel in Paris. He conducted Verdi’s Requiem performed by the World Festival Choir and the outstanding soloists Carol Vaness, Florence Ouivar, Luciano Pavarotti and Roberto Scanduizzi in Oslo, Stockholm and Munich. In the same period of time, the conductor was involved in opera and ballet productions at some of Europe’s best venues, including Rimsky-Korsakov’s The Tale of Tsar Saltan (1988) and Tchaikovsky’s The Oueen of Spades and The Sleeping Beauty (1989) at the Teatro alla Scala in Milan, Bizet’s Carmen (1993), Mussorgsky’s Boris Godunov (1994) and Bartok’s The Miraculous Mandarin
(1995) at the Vienna State Opera, Glinka’s A Life for the Tsar (1996), Rubinstein’s The Demon and Verdi’s Attila (1998) at the Opernhaus in Zurich. Today, Fedoseyev continues to collaborate with the best theatres. So, in 2015 and 2016, he conducted the new La Scala productions of Tchaikovsky’s The Nutcracker (choreographed by Nacho Duato) and The Sleeping Beauty (choreographed by Alexei Ratmansky). In January 2017, he conducted the premiere nights of Puccini’s Turandot at the Helicon-Opera in Moscow and then was invited to be the theatre’s musical director.
The name of Vladimir Fedoseyev is also associated with many orchestras across the world. He was the first guest conductor of the Tokyo Philharmonic Orchestra since 2000, a guest conductor of the Bavarian Radio Symphony Orchestra of Munich, the Radio France Philharmonic Orchestra of Paris, the Finnish Radio Symphony Orchestra, the Berlin Symphony Orchestra, the Dresden Philharmonic Orchestra, the orchestras of Stuttgart, Essen, Cleveland and Pittsburg. Between 1997 and 2006, Vladimir Fedoseyev was the chief conductor of the Vienna Symphony Orchestra, and that decade was marked with the orchestra’s triumphal tours in the countries of Central Europe, Japan, China and the Philippines, as well as the cycle “Beethoven’s Complete Symphonic Works” which was concluded on the 1st of January 2000 with the performance of the Missa solemnis.
No matter how diverse the conductor’s artistic activities are, the Tchaikovsky Symphony Orchestra holds the central place in the life of Vladimir Fedoseyev who has been its artistic director and chief conductor for more than four decades now. During these years the conductor formed a special, recognizable style that brought TSO international fame, performed numerous premieres of contemporary composers’ works constantly extending artistic contacts with Russian and foreign composers, as he did in the beginning of his career with Shostakovich and Sviridov and later on with Krzysztof Penderecki (Poland), Ragnar Soderlind (Norway), Vladimir Rubin and Roman Ledenyov
(Russia).
Among the first large-scale projects of the conductor and TSO were concert productions and performances of the operas Cavalleria rusticana by Mascagni, Cherevichki by Tchaikovsky, and The Snow Maiden and May Night by Rimsky-Korsakov realized for the radio and sound recording. Many of Vladimir Fedoseyev’s recordings, including all symphonies by Beethoven, symphonies by Tchaikovsky, Mahler and Taneyev, were bestsellers. The conductor’s discography also features all symphonies by Brahms released by Warner Classics & Jazz, and symphonies by Shostakovich published by Pony Canyon in Japan.
Vladimir Fedoseyev — people’s artist of the USSR, an owner of numerous prizes and awards, including the Silver Award from Japan’s Asahi Broadcasting Corporation (for the programmes with works by Tchaikovsky and Shostakovich), the order “For Services to the Fatherland” of all Degrees, the Order of St Vladimir, the Order of the Venerable Sergius of Radonezh of the First Degree, the Silver Cross of Merit of the Republic of Austria, the Order of the Cross of Honour of the First Degree for services to the Republic of Austria Culture, and the Gold Medal of the International Gustav Mahler Society. In March 2013, in Prague, the conductor received the Trebbia European Award for creative activities. In October 2013, President of the Russian Federation Vladimir Putin awarded the maestro
the Order of Honour in Kremlin. In 2016, the conductor became an owner of the honorable title “Honoured Music Ait Worker” and the prize of the Union State in the field of literature and arts. In 2017, the Mayor of Moscow, Sergei Sobyanin, awarded the maestro with the mark of distinction “For Services to Moscow” for his outstanding contribution to the development of Russian culture and music. In October 2018, Vladimir Fedoseyev became an honorary professor at the St. Petersburg Conservatory. And in March 2019, he won the Golden Mask Russian National Theater Award.