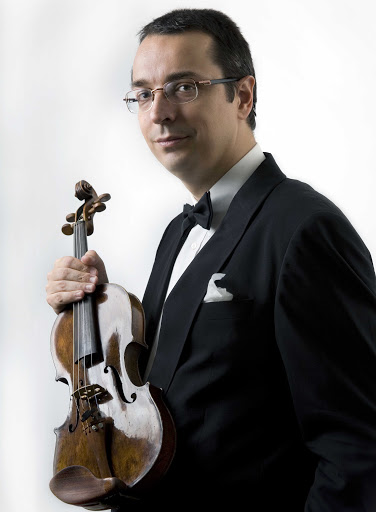 PAVEL ZLATAROV is laureate of the Third prize from the Pancho Vladigerov International Competition in Shumen, Bulgaria, in 1999 and received the nomination for the Young Violinist of the Year Prize by listeners of the Allegro Vivace Program on the Bulgarian National Radio. In the same year 1999 he founded the Helios String Quartet, and in collaboration with it performed at concerts at home and abroad and recorded music by Milcho Leviev for his author’s compact-disc.

Pavel Zlatarov was trained under renowned violin teachers: Mincho Minchev, Dora Ivanova and Lyudmila Ivanova. At the age of twenty-four he won the competition for Concertmaster of the Sofia Philharmonic, which once again served to demonstrate his qualities as musician and his substantial accomplishment as a violin performer.

Pavel Zlatarov has performed as a soloist in collaboration with such orchestras as Sofia Philharmonic, symphony orchestras of Plovdiv, Shumen, Pazardzhik, Vidin and Burgas in partnership with conductors Yordan Dafov, Vladimir Gyaurov, Oliver Gilmour, Deyan Pavlov, Stanislav Ushev and Angel Stankov. His repertoire comprises au- thors such as Bach, Vivaldi, Leclère, Mozart, Beethoven, Brahms, Wieniawski, Paganini, Glazunov, Prokofiev, Vladigerov, and Milcho Leviev. Alongside his performances with orchestra, he participated in successful recitals together with pianist Marina Kapitanova and in concerts with not so frequently performed baroque repertoire.

From 2002 to 2005 he served as visiting-concertmaster of the Toscanini Philharmonic Orchestra in Italy and played under the direction of Lorin Maazel, José Cura, Romano Gandolfi and Gianluigi Gelmetti. He has toured in South Korea and Kyrgyzstan.

In November 2005 Pavel Zlatarov realised a successful tour in Japan with a series of chamber concerts in different cities with the Japanese pianist Keiko Imae. Since 2003 he has been studying conducting as a private student of Academician Vassil Kazandzhiev. Participated in the remote studies program of the Board of Royal mu- sic colleges in London and in June 2006 defended his LRSM diploma (Licentiate of Royal Schools of Music) in conducting. Regularly invited as guest conductor on the educative concerts for children produced by the Fortissimo Familia program.