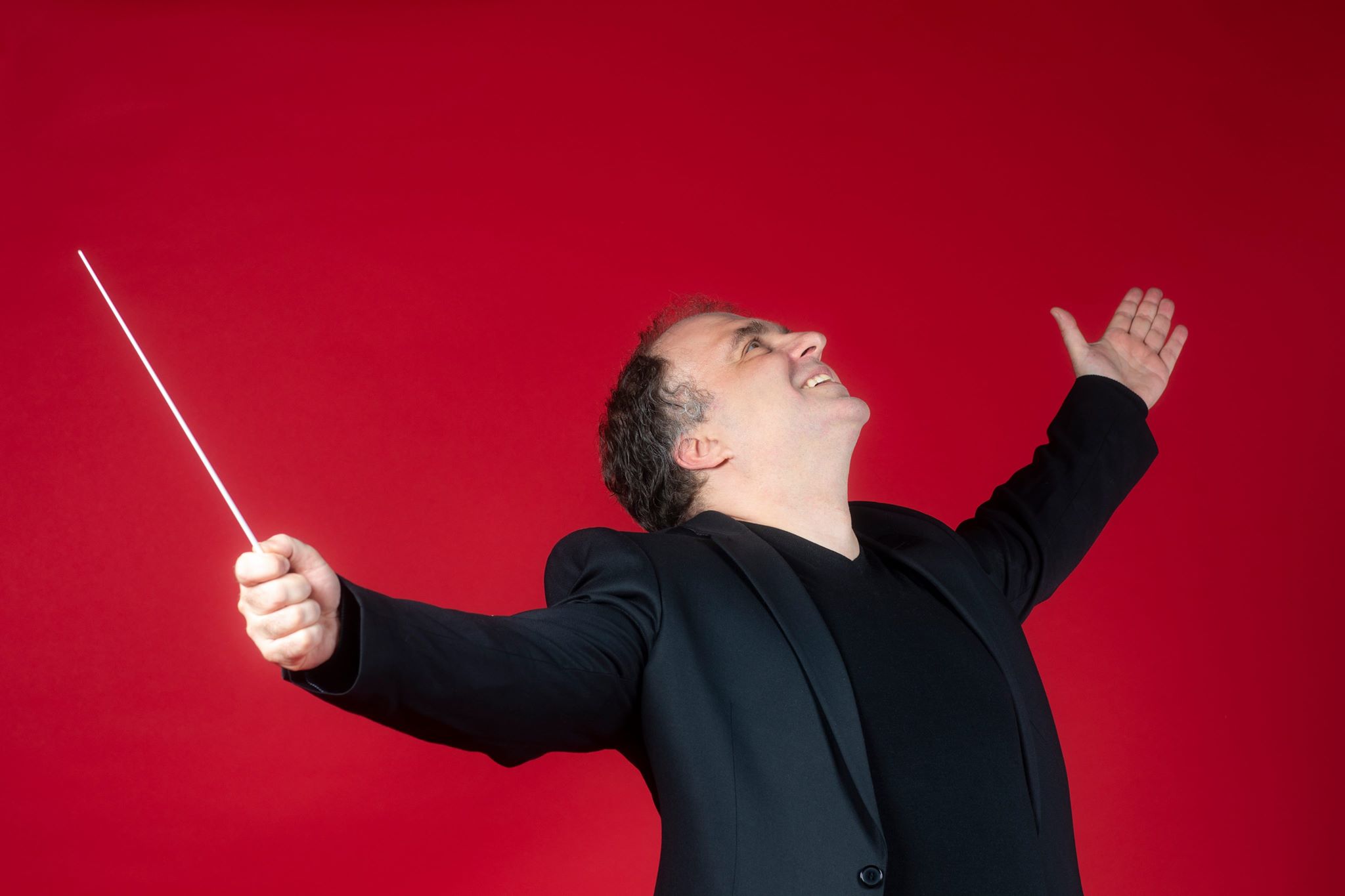 NAYDEN TODOROV is one of the most talented contemporary Bulgarian musicians, who has achieved prominence with his versatile and vivid interpretations of music in different genres.

Born in 1974 in Plovdiv, Bulgaria, he received his first piano lessons at the age of five and at sixteen made his conducting debut. Alexander Vladigerov in Bulgaria and Professor Karl Österreicher in Vienna were great influences on his formation as a conductor. As a student, he won awards from Bulgarian national and international competitions, and in 1990 founded a youth orchestra of his own, with which he performed for more than ten years in Bulgaria, Austria, the Czech Republic, Slovakia and Germany, and recorded several compact-discs. At that time, he began to study conducting with Krastyu Marev, the long-time principal conductor of Opera Plovdiv.

In 1996 -1997, Mr. Todorov was invited by the Leonard Bernstein Foundation, Jerusalem, to undergo a course of advanced studies in Israel, where he worked with Mendi Rodan, the principal conductor of the Israeli Philharmonic. At the same time, he was engaged as trumpet player in the Jerusalem Symphony Orchestra, where he had the opportunity to work with eminent musicians such as David Shallon, Sergiu Comissiona, Lorin Maazel, Krzysztof Penderecki and many others.

His acquaintance in 1996 in Los Angeles with great composer Jerry Goldsmith opened for the young conductor the doors to a new world – film music. Since then, Nayden Todorov regularly performs concerts dedicated to this genre, performing only in the last decade in Munich yearly concerts with symphony music, comprising some of the most famous soundtracks of our time.

In 1997, he founded the Thracia Summer Festival in his native Plovdiv. A year later, he received his first permanent international appointment – in Haifa, Israel, with the North Israeli Symphony Orchestra, where he was selected from over 150 candidates for the position of permanent conductor of the orchestra.

In the following years, Nayden Todorov guest-performed on the stages of many major cultural centres in Europe, Asia, Africa and America.

In 2000, at the age of 26, he was invited to assume the position Music Director of the Plovdiv Opera and Philharmonic Orchestra, becoming the youngest conductor in Bulgaria to hold such a position. At the Plovdiv Opera, in early 2001, he made his operatic debut with the premiere of Puccini’s Tosca. With the Plovdiv Philharmonic Orchestra, he recorded the symphonies of Louis Glass for the Danish label Danacord, as well as over 100 disks for the American label MMO. At the Summer Festival at the Ancient Theatre, he conducted concerts and performances of the Plovdiv Opera, featuring prominent Bulgarian and international singers, including glittering names such as Ghena Dimitrova, Nikola Ghiuselev, Kaludi Kaludov, Hui He, Kamen Chanev. In Plovdiv, he also realized Dario Fo’s super-production of Rossini’s opera The Barber of Seville, and toured to present it in the Netherlands, Germany and the United Kingdom. Later, the young conductor received the Plovdiv Award for his concert with the Plovdiv Philharmonic and John Lord.

In 2001, after several years of collaborative projects for the American record label MMO, Nayden Todorov had his first appearance on stage with the Sofia Opera Orchestra, in a concert of the first master class of great Bulgarian diva Raina Kabaivanska. Over the years, in addition to the concerts at her master classes with the orchestras of the Sofia Opera and the Sofia Philharmonic, he has conducted also at concerts she held in Italy and Spain. During these master classes, he had the opportunity to establish artistic contacts with singers such as Maria Agresta, Andrea Carè, Vittoria Yeo, Marily Santoro.

Nayden Todorov’s opera debut at the Sofia Opera was in 2002 with Verdi’s Traviata (with famous Bulgarian singer Darina Takova in the title role), and several months later conducted there the premiere of the opera Faust by Gounod, featuring performances of Tsvetana Bandalovska, Julian Konstantinov, Adam Zdunikowski and Stefka Mineva. Again at the Sofia Opera, he had his ballet debut in 2003, with Romeo and Juliet by Sergei Prokofiev.

After the successful premiere of Carmen on Sofia stage with singers such as Laura Brioli, Anna Cuo and Ivan Momirov, Nayden Todorov debuted in 2005 with the Sofia Opera at the Solothurn Opera Festival, in a performance of Gounod’s Faust, which started an active collaboration which continued later with numerous guest-performances of the Ruse Opera at this festival.

In 2006, on stage of the Sofia Opera, he also performed his first collaborative production with the Swiss director Gian Gianotti – the opera The Italian in Algeria by Rossini, marking the beginning of long-standing and fruitful creative relations.

Since 2004, he has been the conductor of the popular production ‘The Night of the Five Tenors’, with numerous guest appearances on major German stages, such as the Berlin Philharmonic, the Herculessaal in Munich, the Laeiszhalle in Hamburg, the Liederhalle in Stuttgart, the Alte Oper in Frankfurt, Meistersingerhalle in Nuremberg and many more.

In 2005, Nayden Todorov established his first creative contact with Grandopera Wichita, a company with which he realized various productions over the years – Aida by Verdi, Tosca by Puccini, William Tell by Rossini. In Wichita, he worked with singers such as Samuel Ramey, Annalisa Rospigliosi, Lucas Meachem, Michael Spyres, as well as with Bulgarian singer Zvetelina Vassileva.

In the period 2005-2017, Nayden Todorov served as director of the State Opera in Ruse, with which he participated in many prestigious forums in different countries all over Europe. He has also recorded several compact-discs with the Ruse Symphony Orchestra, the last one, featuring works by Pancho Vladigerov, for the Naxos label. He also has a released DVD recording of his Bucharest concert with the Ruse Philharmonic and John Lord. With the ballet of the Ruse Opera, he undertook various tours in Italy, South Korea and Dubai. A performance that has remained emblematic, the production of Katerina Izmailova by Dmitry Shostakovich, directed by Vera Nemirova was covered in a special program on the Austrian television, as well as by the major periodical Die Opernwelt.

In 2006, the talented conductor made his debut with the Berlin Symphony Orchestra, and only a year later was invited to conduct the concerts at the orchestra’s tour in Japan’s biggest cities in Japan.

In 2009, he performed his first concert at the Tchaikovsky Hall in Moscow with the Yaroslavl Philharmonic Orchestra, and in 2010 debuted at the Wiener Volksoper, conducting the performances of Tchaikovsky’s ballet The Nutcracker with the Vienna State Ballet.

In 2013, Nayden Todorov graduated as a manager in the field of culture at the New Bulgarian University, where in recent years he has been invited to lecture. His teaching activity also includes master classes in Portugal and Spain. In 2013, he acted as a jury member at the International Blue Danube Competition for Conductors, and in 2016 he was its chairman. In 2019, he also acted as chairman of the prestigious jury of the Gena Dimitrova Singing Competition, with members Alexandrina Miltcheva, Darina Takova, Kaludi Kaludov and Adrian Hollaender.

In addition to his intensive activity in Bulgaria, Nayden Todorov has conducted hundreds of symphonic concerts, opera and ballet performances with various orchestras and opera companies in Austria, Germany, Italy, Spain, Portugal, United Kingdom, Romania, Serbia, Macedonia, Kosovo, Poland, Czech Republic, Poland, Czech Republic Slovakia, Turkey, Russia, Israel, Egypt, China, South Korea, USA and others. He has also taken part in a number of international crossover projects, including a series of concerts with the keyboardist of Deep Purple, John Lord, as well as special projects with American pop singer Anastasia, Douglas “Doogie” White of Rainbow, and stars from the world of the musicals such as Anna-Maria Kaufman, Steve Balsamo, Katarzyna (Kasia) Łaska, and many more.

Over the years, Nayden Todorov has worked with absolutely all symphony orchestras and opera theaters in Bulgaria, but has a special bond with the Sofia Philharmonic Orchestra, after his first concert with them in 2001. In 2004, he was named its permanent guest conductor, to become later principal guest-conductor, and from the beginning of 2017 was elected its director. He is connected with the Sofia Philharmonic in a long-standing and intense creative journey.

In 2005, Nayden Todorov received his first Crystal Lyre for his performance with the Sofia Philharmonic Orchestra of the Second Symphony by Gustav Mahler. In the same year he made a new recording of the National Bulgarian Anthem with soloists Raina Kabaivanska, Nicola Ghiuselev, Roberta and Orlin Goranov.

For the popularization of Bulgarian music with the same orchestra, he received the Union of Bulgarian Composers’ Golden Stave Award, and later went on to receive distinctions such as the Golden Book Award, the Plaque of the President of the Republic of Bulgaria, and many others.

In 2008, together with the Sofia Philharmonic and soloists Svetlin Rusev, Ludmil Angelov and Borislav Yotsov, Nayden Todorov debuted at the UNESCO Hall in Paris.

In 2009, with the Sofia Philharmonic Orchestra, he made a debut at the Bolshoi Theatre in Moscow, and the very next year appeared with the same orchestra at the Klagenfurt Summer Festival in Austria.

As of 2018, as part of the educational policy of the Sofia Philharmonic Orchestra, Nayden Todorov functions as presenter on the classical music program on the Bulgarian National Television – “In Concert with BNT 2”.

At the beginning of 2018, he also led the ceremonial concert of the Sofia Philharmonic Orchestra for the inauguration of the Bulgarian Presidency of the European Council in the world-famous BOZAR Hall in Brussels, with soloists Sonya Yoncheva and Ludmil Angelov.

In 2019, Disney organized the first major Star Wars in a Concert show in some of the major cities of China, with the participation of the Sofia Philharmonic Orchestra under the direction of Nayden Todorov.

In his concerts with the Sofia Philharmonic Orchestra Nayden Todorov has collaborated with some of the most prominent singers and instrumental performers in the world, such as Raina Kabaivanska, Angela Gheorghiu, Sonya Yoncheva, Vesselina Kasarova, Paul Badura-Skoda, Milena Mollova, Bernd Glemser, Peter Rözel, Yuri Bashmet, Patricia Kopatchinskaja, Sarah Chang, Maxim Vengerov, Vadim Repin, Julian Rachlin, and many others!

In 2019, for his concerts with the Sofia Philharmonic, Nayden Todorov was voted for the second time Musician of the Year by the listeners of the Bulgarian National Radio.