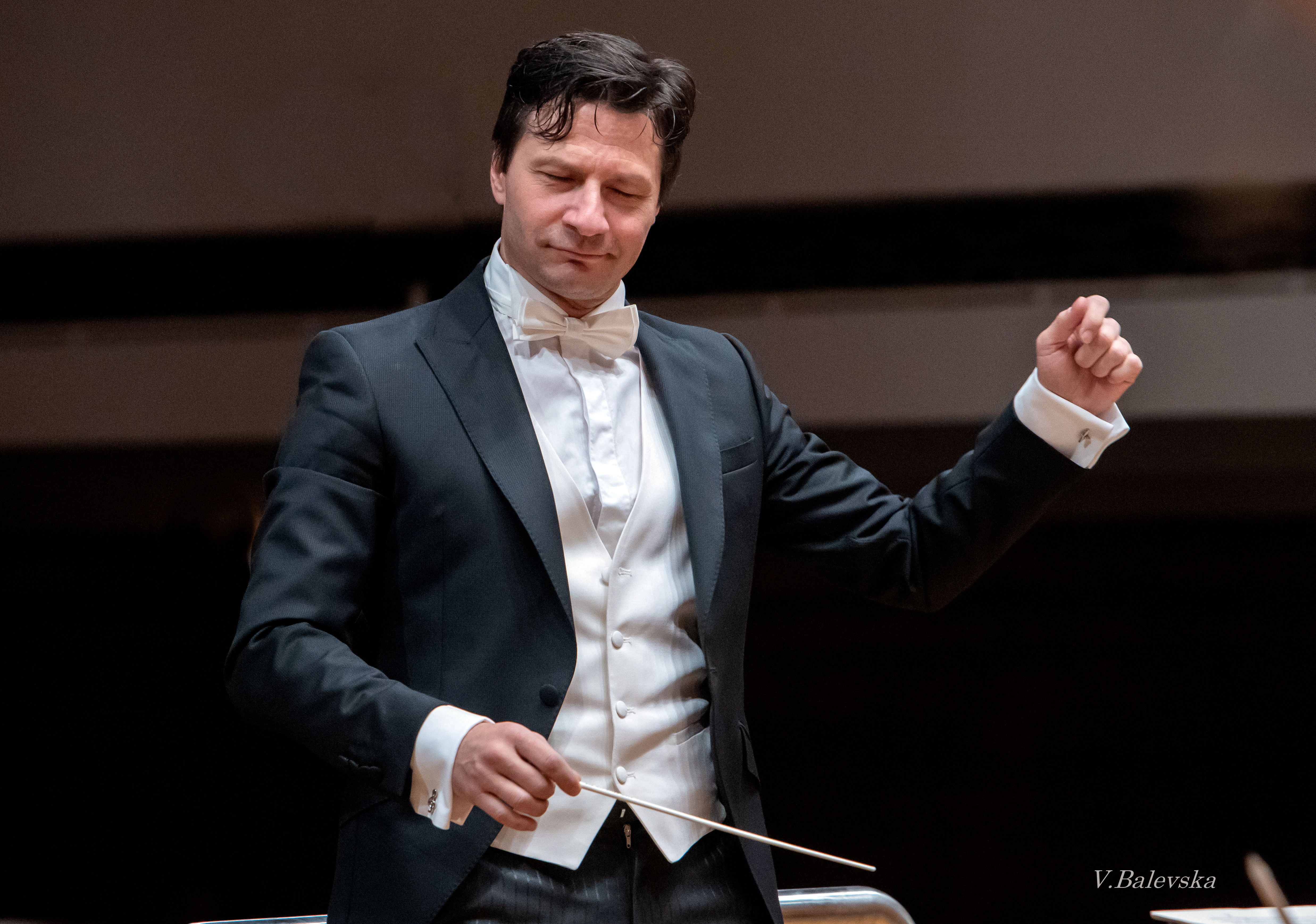 Described by the Los Angeles Times as “charismatic and exciting,” Maxim Eshkenazy is a rising star in the contemporary generation of young conductors. His exceptional musicianship and artistic vision combined with his passion for education, brings new audiences into the concert hall and into a lifestyle of loving music.

Eshkenazy’s celebrity in Bulgaria makes him one of the most popular guest conductors for the Sofia Philharmonic Orchestra, Classic FM Orchestra, Pleven, Stara, Zagora, Varna and Burgas Opera Orchestras. Additionally, he has had the privilege of working with some of the finest artists in his Bulgarian concerts including Joshua Bell, Midori, Pinchas Zukerman, Shlomo Mintz and Sarah Chang.

Maxim Eshkenazy has a special relation to contemporary music. As music director of the Chamber Orchestra “Music of Changes”, he was involved in many performances and premieres of contemporary works. He regularly included in the program works by contemporary composers such as George Andreev, Jim Self, Steve Miller, James Taylor, Sandor faithful and others.

In addition to guest conducting, Eshkenazy advises and oversees a number of programs he founded. In 2010 he began Fortissimo Fest: a classical music festival that showcases American and Bulgarian artists and features a variety of event types and sizes. Every year more than 10,000 people attend the festival events with the highlight being a large, outdoor concert spectacular conducted by Eshkenazy.”

ll of the Fortissimo endeavors have seen tremendous growth and popularity in Bulgaria, due in large part to Eshkenazy’s engaging music making and careful curation of content.

From 2008 to 2013 he served as assistant conductor of Pacific Symphony under Carl St.Clair and the music director of the Pacific Symphony Youth Orchestra (PSYO). In 2011 PSYO embarked on a concert tour of Bulgaria’s largest cities: Sofia, Varna and Plovdiv. The tour was welcomed by sold out concerts and the students‘ experience was captured in a documentary and broadcast on PBS SoCal. During Eshkenazy’s five years as music director, the PSYO saw marked advancement in both their artistic excellence as well as the richness of their repertoire. In 2012 PSYO won the prestigious Youth Orchestra of the Year award from Classics Alive Foundation.

In 2010, Maxim founded the “Fortissimo Fest” – festival for classical music, which builds a bridge between the culture of Bulgaria and the SA to present in an exciting and attractive way the richness of classical music for the wider audience. Since then, every year more than 10 000 people get the opportunity to get in touch with the art of Maxim Eshkenazy at outdoor concerts in the largest cities of the country. After the extraordinary success of the festival Maxim Eshkenazy program created the “Fortissimo in class” program that focuses on bringing professional musicians to 32 schools in the country and familiarizing children with musical instruments and the gems of classical music. In 2012 Maxim Eshkenazy launched a new program – “Fortissimo Family”, which offers family concerts and enjoys great popularity. This generous initiative of Maxim Eshkenazy in Bulgaria does not pursue commercial interests and his charismatic personality is extremely appreciated by the Bulgarian society – his popularity at home is like the one of a pop star.

As assistant conductor of Pacific Symphony, he conducted and collaborated on the creation of its educational concerts, including the family concert subscription series as well as school bus-in concerts. Additionally, he conducted the annual Tchaikovsky Spectacular concert and others including Cirque de la Symphonie and a multimedia National Education project and concert presentation “Dvorak in America.”

Much of Eshkenazy’s current work is with students and youth orchestras in the Southern California region. His passion for teaching and bringing an orchestral experience to young musicians is evident as he leads these ensembles. Eshkenazy holds several positions at the Colburn School of Performing Arts including music director, conductor of the Chamber Orchestra, and staff conductor of the Colburn Conservatory Orchestra. In September 2010 the Colburn Orchestra, under Eshkenazy’s leadership, performed a series of concerts during a tour of Bulgaria. Eshkenazy also serves as music director and conductor of the Bakersfield Youth Symphony Orchestra and, in 2011, lead the group on a successful tour of South Korea.

Eshkenazy was born into a family of musicians in Sofia, Bulgaria. He began playing the violin at age five and graduated from the L. Pipkov National Music School and then the Pancho Vladigerov National Music Academy in Sofia. After winning a scholarship, he continued his education at the University of Southern California (USC) where he completed master’s degrees in both violin performance and orchestral conducting.

During his schooling, Eshkenazy was fortunate enough to study conducting with Hans Bear, Sergio Comissione and at the Pierre Monteux school in Maine. During master classes he worked with conducting greats such as Pierre Boulez, Esa-Pekka Salonen, Zubin Mehta, Kent Nagano and Michael Tilson-Thomas. In the summer of 2000 Eshkenazy received the American Academy of Conducting at Aspen fellowship at the Aspen Music Festival.

In addition to conducting, Eshkenazy continues to play the violin and participates in chamber music ensembles. Eshkenazy also enjoys a number of extreme hobbies including scuba diving and paragliding. He is also a licensed airplane and helicopter pilot.