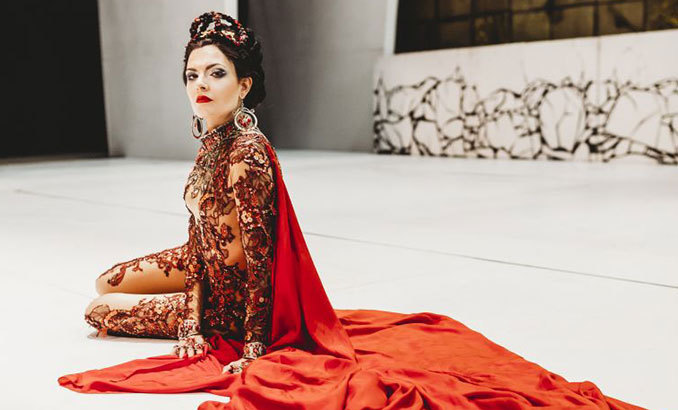 MARIA RADOEVA graduated from the Sofia National Academy of Music in 2006 year, where she studied with Assoc. Lyudmila Hadjieva, and in 2012 took a master’s degree. Her love for vocal music originated with the Bulgarian National Radio Children’s Choir where she has been performing as soloist for a stretch of ten years. Laureate of a number of competitions in Bulgaria, such as those named after Svetoslav Obretenov, Georgi Zlatev-Cherkin, Lubomir Pipkov, etc., Maria is also the special prizewinner at the Marl Chamber Music Competition, Germany.

In 2006, following her participation at the Neue Stimmen (“New Voices”) Competition in Germany, she was granted the privilege to participate in an exclusive master class. Radoeva also took part in master classes led by world-renowned names such as Gustav Kuhn, Francisco Araiza, Siegfried Jerusalem and Katia Ricciarell. In 2011, she was selected from among more than 600 candidates to participate in the prestigious singing competition Cardiff Singer of the World. Radoeva made her operatic debut in 2006, on the stage of the Russe Opera, performing Zerlina in Mozart’s Don Giovanni. In 2008, she was selected by renowned French harpsychordist and conductor, Maestro Christophe Rousset for his Siena Monteverdi Project and performed with his music ensemble Les Talens Lyriques at concerts in various locations in Tuscany, Italy.

Radoeva made her debut at Sofia Opera House as Musetta in Puccini’s La bohème. She reprised the role on her Italian debut in 2012 – at the Teatro Comunale of Modena. The wide range of her voice and her varied musical interests determined her as a natural choice for the performance of the soprano solo part in Gustav Mahler’s Second Symphony with the French National Orchestra of the Loire Region (“Orchestre National de Pays de la de Loire“) conducted by Isaac Karabtchevsky. She also performed to great acclaim in Verdi’s Requiem with the Royal Philharmonic Orchestra at the  Royal Festival Hall, London. The year 2013 saw the release of the first compact-disc featuring Radoeva’s performance – in Rossini’s Petite Messe Solennelle.

In subsequent years she appeared at the Teatro Reggio in Torino, the Varna Opera House and the festival Tiroler Festspiele Erl in Austria, where she sang under the baton of Gustav Kuhn in Verdi’s Nabucco, Rossini’s Semiramida and Ermione, and Mozart’s Il Re Pastore.