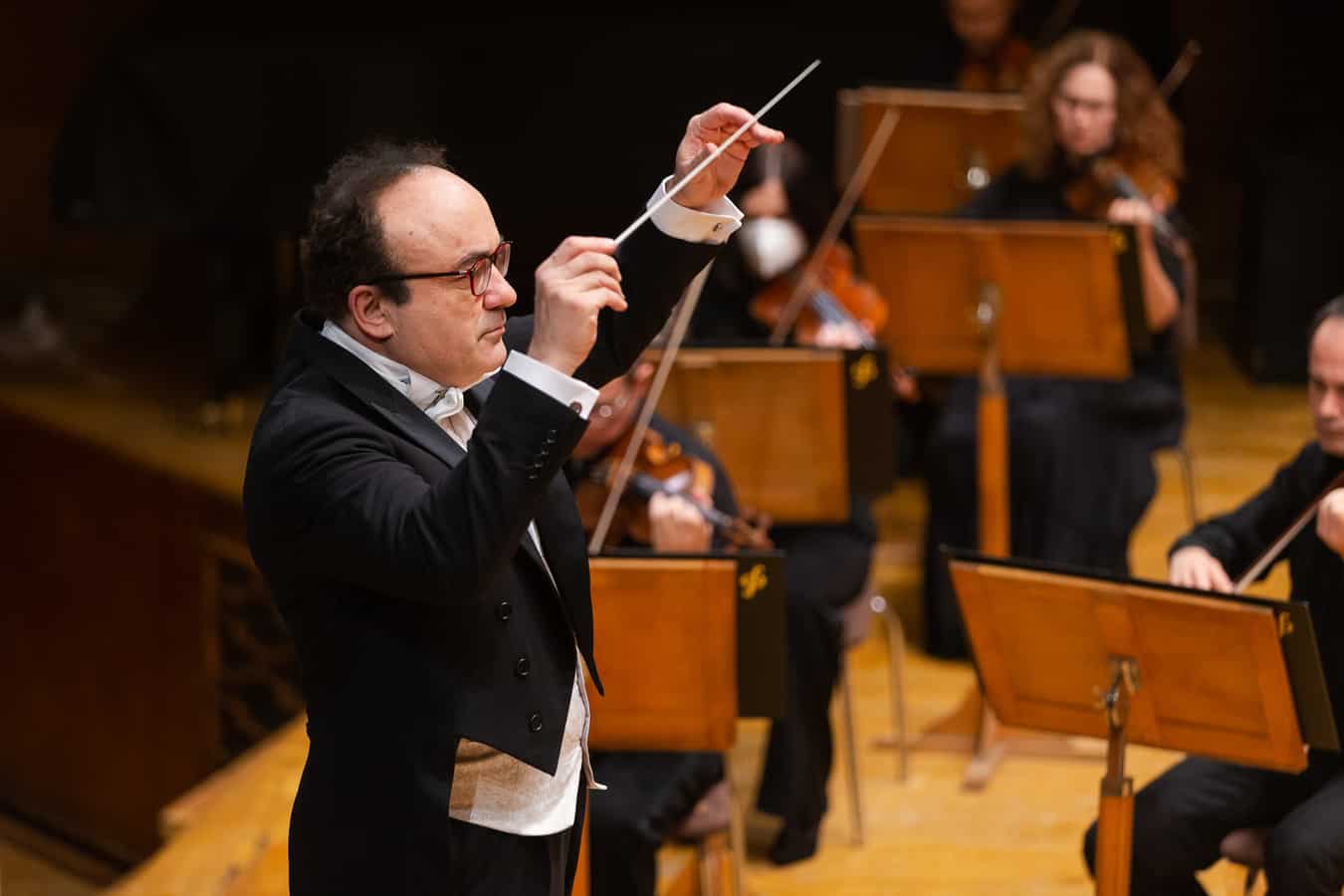 Conductor, composer, pianist and author, Frédéric Chaslin was born in Paris and educated at the Paris Conservatoire and the Salzburg Mozarteum. He became assistant of Daniel Barenboim from 1987 to 1989 at the Orchestre de Paris and Bayreuth Festival, in 1989 he became Pierre Boulez’s assistant at the Ensemble Intercontemporain until 1991.
He became successively Music Director of the Opera in Rouen (1991-94), the Jerusalem Symphony Orchestra (1998-2001), the Mannheim Nationaltheater (2004-2007), the Santa Fe Opera (2009-2013) and for his second tenure, the Jerusalem Symphony (2011-2019). Frederic Chaslin divides his conducting activities equaly between operatic and symphonic performances. At the opera, he conducted New York Metropolitan (since 2002), Los Angeles Opera, Berlin Deutsche Oper, Munich Bayerische Staatsoper, as well as Leipzig, Dresden, Madrid, Bologna, Roma, Venice, Torino, Tokyo, Oslo, Copenhagen. Frederic Chaslin made his Austrain debuts in 1993 at the Bregenzer Festspiele for Nabucco (93, 94) and Fidelio (95, 96). Since 1997, he is a regular guest conductor at the Vienna State Opera where he conducted nearly 250 performances of 34 different tittles, as well as concert with the Vienna Philharmonic as a conductor and as a pianist (September 2001, Beethoven 5th piano concerto. Paril 2018, Mahler’s 5th Symphony).
Major recent appearences were two new productions of Tales of Hoffman in Dresden and Copenhagen. In the symphonic repertoire, he’s conducted all major french orchestras (Orchestre de Paris, Orchestra National, Radio-France Philharmonic, Paris Opera Orchestra), the Milan Scala Philharmonic, Torino Rai, Manchester Hallé, London Philhramonia, London Symphony, Vienna Symphony, Vienna Philharmonic, Spain National Orchestra, Gulbenkian Foundation Orchestra (Lisbon), Israel Philharmonic, Nagoya Philharmonic. He performed several piano concertos as a conductor/pianist (Ravel 2 piano concertos, Beethoven 5 piano concertos with the Vienna Philharmonic, Mozart K488 with the Vienna Chamber Orchestra).
As a composer, Frederic Chaslin wrote 5 operas and over 50 melodies for soprano, mezzo and baritone. Excerpts of this operas have been sung and recorded by the most famous sopranos (Netrebko, Dessay, Peretyatko, and Damrau who recorded Chaslin’s arias in her CD «Damrau Forеver », Warner). Symphonic compositions include the « Gipsy Dance» for violon and orchestra and a cello concerto. His most recent “11 Variations for Trombone and Orchestra spraid his name among the most famous trombone players of the world. As an author, Frederic Chaslin wrote an essay, « Music in Every Sense » published in Paris (France-Empire) and Germany (Böhlau) and available in English on Kindle. In october 2017 he released a novel based on the life of Gustav Mahler,”Being Gustav Mahler”, (Fayard, Paris) together with his own orchestration of Mahler’s 10th symphony that has been premiered on Nov 30th, 2018, with the Zagreb Philharmonic. Starting May 3, 2019, his latest opera/musical Monte Cristo, commissionned by Placido Domingo for the Los Angeles opera, will be workshoped and performed in such places as L. A. Opera, Valencia (Spain), Paris, Monte Carlo, Bologna, Lisbon and Vienna.